It was a simple task. Send out an email invite to the screening of a movie that is controversial enough to get their name in the paper and have everyone talking about them. Ideally, they were probably hoping for a censorship backlash that could have resulted in a “free speech” fight with the University.

That’s what could have happened when they hit “send”. Instead, the Wildrose faction of University of Calgary students found themselves in the centre of another debate; Women’s Equality.  While there are numerous ways to get your name in the paper, this is not the favoured route, even for the Wildrose. However, as Derek Fildebrandt so eloquently stated “Hyper-sensitive, politically correct, victim as virtue culture is creating a leadership class of wimps.” (Nov 12, 2016).  Though Fildebrandt insists he is not a social conservative, it’s the company you keep.

I mean, in 2012 when the Wildrose did not form government after so many polls said they would, many pointed to the “Lake of Fire” story and claimed it contributed to their loss.  In April of 2015, Rick Strankman, MLA for Drumheller-Stettler took some heat for staying out of the kitchen when a “volunteer” circulated an invitation asking attendees to “Bring Your Wife’s Pie”. 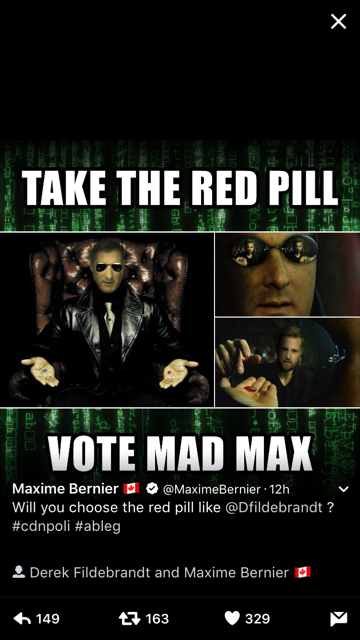 the new Maxime Bernier meme featuring double-downer Wildrose MLA Derek Fildebrandt and referencing the “red pill” which he circulated yesterday and you have a full-blown blow back. Especially when the tweeter of said meme claims to have no knowledge of the more modern interpretation of “red pill”. If a reader is so inclined, they can google it – I won’t link to such garbage.

For a political party that has seen their fair (or unfair, if you swing that way) share of controversy since becoming the Wildrose, this doesn’t help.  Personally, I don’t see this doing any harm to their brand; this is, after all, their brand.

And if Jason Kenney is successful in winning the PC leadership, dissolving the PC party, getting Wildrose to agree to dissolve their party, and creating a new conservative party, people will forget the Wildrose Party of Alberta ever existed. Which, really, is nothing but beneficial for them in a modern world.