The Conservative movement in Canada (and around the world) has been pandering to far right and populist movements for a period of time, but this has accelerated in the last few years, emboldened by the election of Donald Trump, the ‘success’ of the Brexit referendum, and a resurgent Russia that is seeking to sow discord in formerly stable liberal democracies.

In Canada, the activity really started to ramp up with the advent of Rebel Media, and in the period of the CPC’s last term and lead up to the 2015 election campaign. During this time, we saw the CPC under then Immigration Minister Jason Kenney impose a niqab ban (2011) and calls for a barbaric cultural practices hotline. (Or as we call it in Canada, 911, hence redundant).

Fortunately, Canadians rejected these dog-whistles in the last election, but a lot has changed since then. Unsurprisingly the persistent dog-whistling, race baiting, and fear stoking about immigration by our mainstream opposition have fanned the flames of intolerance in our country. 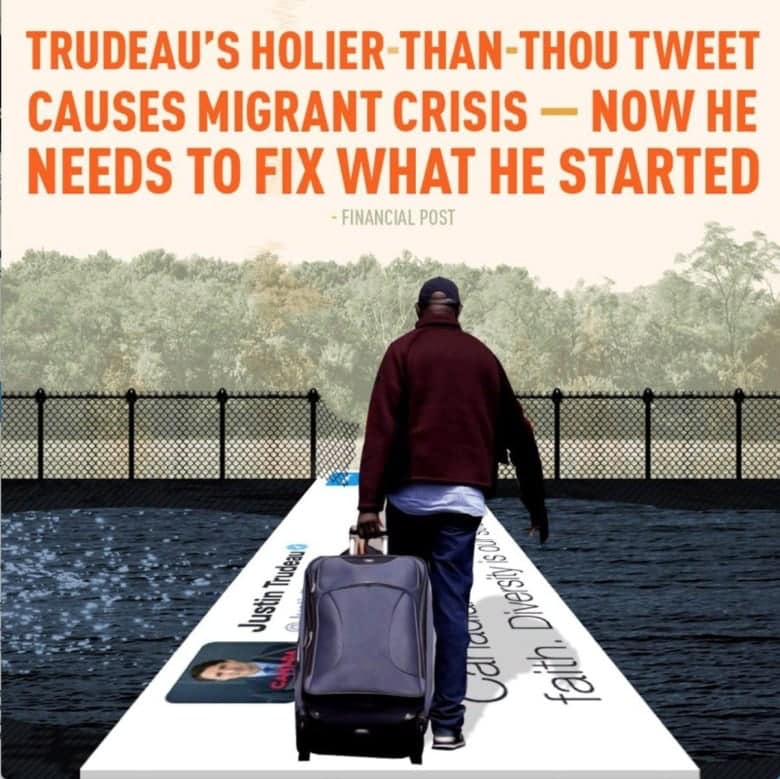 We see groups like the Soldiers of Odin, the III%-ers, and the Clann – all known ethnocentric supremacist groups openly roaming and provoking in our major cities. The Yellow Vest movement of France has been co-opted in Canada as a movement that has taken up the cause, calling for anti-immigration (and by proxy, anti-immigrant) policies to be advanced.

Just over a year ago, such an extremist walked into a mosque in Quebec City and gunned down several worshippers, killing six and injuring nineteen.

On top of this, the leader of the Official Opposition, Andrew Scheer, has chosen to surround himself with advisors and strategists deeply tied to the alt-right, and anti-immigrant movements. 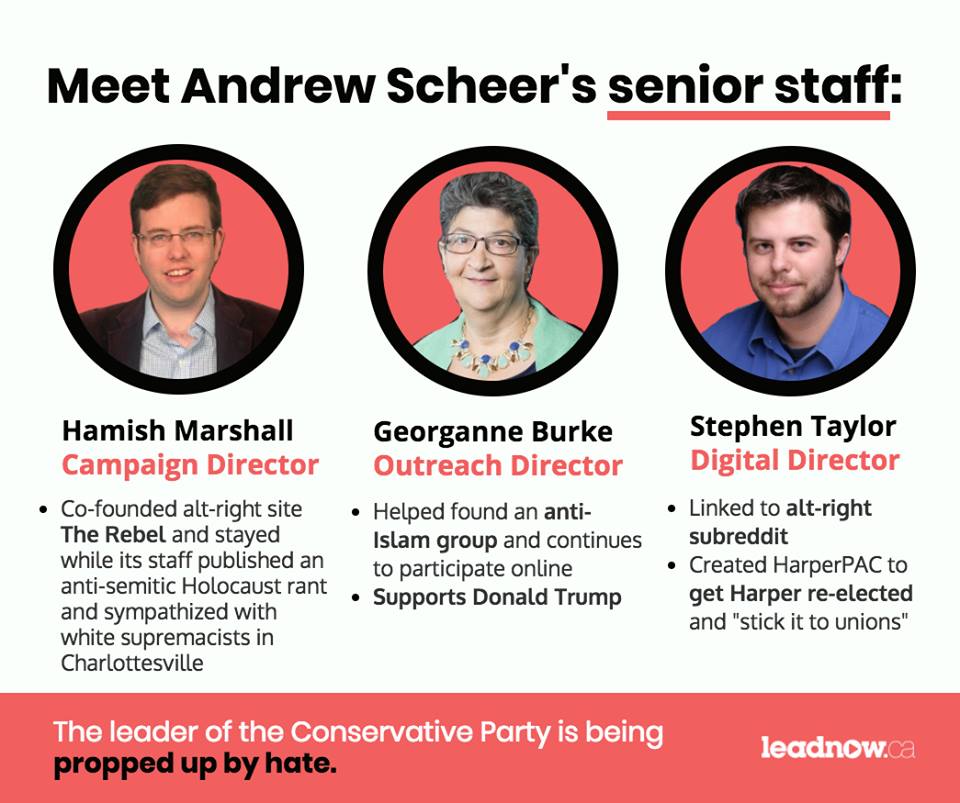 He and members of his caucus have appeared on The Rebel regularly, including with Faith Goldy, of Charlottesville infamy. 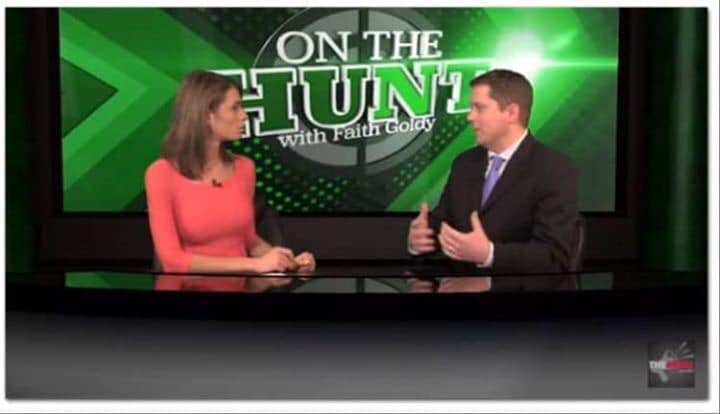 Following the Quebec mosque shooting, Scheer along with his seatmates in the House of Commons, fought against a private Liberal member’s motion to decry Islamophobia, insisting it is a controversial term, and that it infringed upon freedom of speech (this despite other such motions being made against anti-Semitism in the past).

It has become a regular occurrence to stoke fears of a border crisis since the election of Donald Trump. Rather than focusing on fixing an inefficient immigration and asylum system through policy, the Conservatives have tried to leverage fear and misinformation to score political points on the backs of vulnerable asylum seekers, with spillover into legitimate refugees and immigrants, as well as domestic people of colour.

So, I took a bit of umbrage when Scheer took to Twitter with a statement of condolence that was about as weak as the water safety programs in Flint Michigan.

Scheer may not directly endorse these views, but he enables and encourages them, and the people he surrounds himself with most closely have certainly played a role in the exacerbation of them.

The fact that he could not come out and state the religious group that was targeted or acknowledge that it was driven by a self-declared far right ethnocentric extremist betrayed his commitment to these factions in his base. 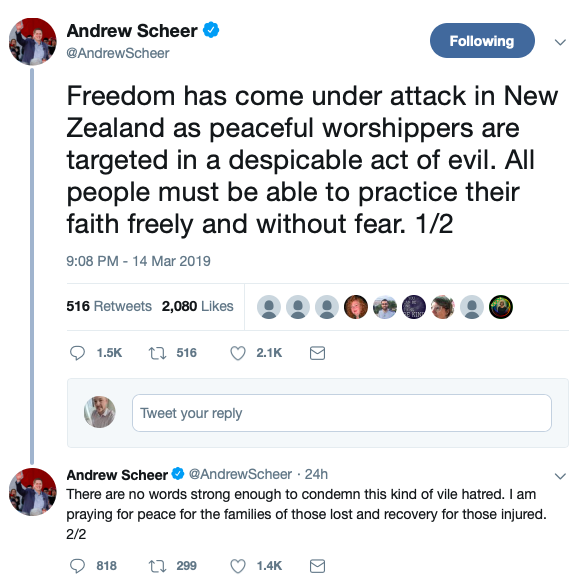 This was not an attack on freedom. It was a targeted attack on MUSLIMS. By someone who went so far as to have the name of the Quebec Mosque shooter on his weapon as he brutally cut short the lives of dozens of people, all the while live broadcasting it to the world.

It’s the rhetoric of the CPC, including Scheer, Kenney, and former Prime Minister Stephen Harper on niqabs and the persistent fear-mongering about illegal immigrants by the likes of Michelle Rempel, Kellie Leitch, and leadership runner-up Max Bernier… It’s the vile racist and Islamophobic spew of Rebel Media stalwarts Ezra Levant and Sheila Gunn Reid… It’s the scare tactics about Sharia law, and the cuddly relationship with Hamish Marshall, Stephen Taylor, Faith Goldy, and Georganne Burke that emboldens these groups. These people who ascribe to such hateful, deadly views are empowered by seeing these views in the highest offices of our country.

We have to look at our conservative “leaders” and who they are associated with, who they “tolerate”, and the rhetoric they allow, and demand better.

Admittedly Scheer did put out a far more fulsome and meaningful statement on the attack, almost 24 hours later.

But if he truly cares about the 49 left senselessly dead, he would acknowledge the role that the company he keeps has played in fostering this climate of fear and hate and take strong action.

Until then, it’s hard to see his words as anything but crocodile tears.