Premier Jason Kenney crossed a red line today in a speech to the Oil Sands Trade Show in Fort McMurray.

In the video shared by Edmonton CBC Journalist Michelle Bellefontaine, Kenney is seen opining about the way that countries like Russia have dealt with Greenpeace protestors, calling it “instructive.”

“In Russia, their crew was arrested and thrown in a Siberian jail for six months and funnily enough they’ve never been back. I’m not recommending that for Canada but it’s uh, it’s instructive. Do you think they’d get away with this in the Bolivarian Socialist Republic of Venezuela? Or Saudi, the Kingdom of Saudi Arabia? Or the Islamic Republic of Iran? We all know the answer to that question.”

I need to preface these comments with my vehement disagreement with most of what Greenpeace does, and the tactics they employ to block legal projects and development.

Comments such as those that Kenney shared today at the Oil Sands Trade Show are the inflammatory and dangerous rhetoric that can lead to a dictatorial authoritarian regime.

Mr. Kenney has shown this week that his admiration for those rights and freedoms only extends to those with whom he agrees.

A person is free to disagree with Greenpeace and their messaging. The police are able to enforce our laws which prevent vandalism, trespassing, and mischief. A group that has a contrary view, sincerely held, and articulated peacefully must never, ever, in a free society, be implicitly threatened, even jokingly, with imprisonment.

This week has been a truly disturbing one from our new Premier. The establishment of a government operated snitch line that has captured the attention of Amnesty International, and now the open musing of our Premier about imprisoning dissenting voices cannot be accepted in a free and open democracy.

For someone who regularly touts the supremacy of Canadian energy above that from places like Venezuela, Saudi Arabia, and Iran – Mr. Kenney is ill advised to tout their human rights practices as something to be admired, even in jest.

The words of our leaders’ matter. Mr. Kenney’s this week have been outright dangerous.

This post is based on facts with informed opinion. 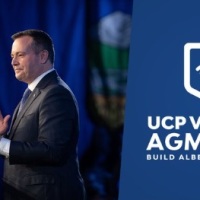