After three long weeks of local, national and even international speculation over Jason Kenney’s comments about notifying parents should their children join GSAs, he has reemerged as only an unelected provincial representative can; on social media.  Tuesday, Jason Kenney released a video weighing in on the all-encompassing topic of photo radar.

That last bit might be news.  Photo radar has certainly been in the news over the years and in fact has been brought up by others, including an ex-radar operator in Edmonton as recently as 2015.  To the best of my knowledge, it isn’t exactly a relevant political party issue that is begging for someone to take the lead on, but hey, it got people talking. 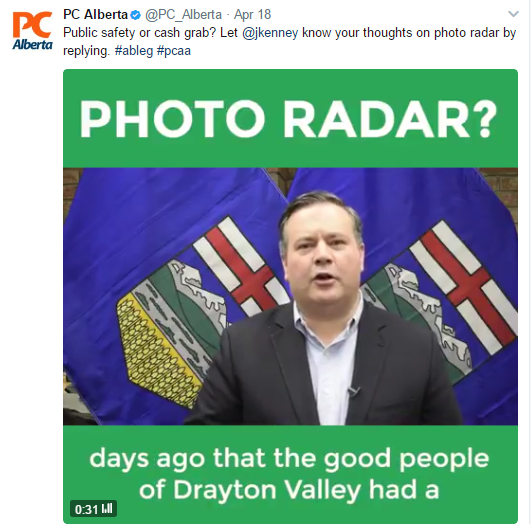 Is photo radar a tax grab?  A solid argument could be made that it allows for lower taxes for everyone. To begin with, it is a much less expensive way to encourage order than an officer standing on every corner.   And I doubt Kenney is advocating for spending additional funds on people, benefits and police vehicles.  Is being stopped by a police officer instead of receiving an emotionless photo of your vehicle speeding through a photo radar zone better?  After receiving a ticket on Saturday morning, I can say, no, it didn’t make me feel better.

If the municipalities were to remove photo radar, where would the additional income come from?  According to one article, the City of Edmonton brought in $34,500,000 in revenue from photo radar in 2015.  That revenue is not added to the city’s general revenue but is earmarked for traffic safety initiatives,  Signs cost money, traffic lights cost money, policing costs money.  Where would the money come from if not from photo radar?  The province (all Albertans) or the city (all Edmontonians)?  Does it make sense to remove a revenue stream from people who break the law and add it instead to law-abiding citizens?  It’s a strange argument to make.

There is another aspect to photo radar as well.  Does it make a difference?  There are two photo radar locations I drive through quite regularly in Calgary.  Both are at heavy traffic intersections and both have high risks of collisions.  Remember those cute signs of a car with a dent that said “high collision area”?   Personally, I remember it’s a photo radar location better than a high risk area and I know I take better care.  According to an article from this year, since photo radar was handed over to the City of Edmonton in 2013, serious injuries are on the decline.  Deaths are also declining but there was an uptick in 2015 that skews the graph. 2016 numbers show an overall decline within the last decade.

Calling photo radar a “tax grab” simply makes no sense.  Although there is a fee associated with breaking the law, the only people who pay that fee are those who actually break the law.  The last one I received was in 2013, so yes, I did pay a photo radar ticket four years ago but not since.  I do, however, pay income taxes every hour that I work.  I also pay GST when I buy things and I pay a carbon tax as well.  These are things I pay because they’re charged in addition to regular things I buy or do.  Those are taxes.  Everyone pays them. The good news is there’s no legal ramification for not speeding and it’s not nearly as difficult as avoiding taxes.