We are officially less than 12 hours away from the launch of the PC Leadership Convention and excitement is in the air!  To be clear, there’s no sense of anticipation regarding the actual leadership vote as there’s very little probability that Jason Kenney will not win.  If he’s been truthful about the elected delegates being on his team, this is hardly even a contest. What’s really exhilarating is that there will be a new race starting on March 19, 2017!  How can we be so lucky to have all of this activity in between election years?!

Strangely enough, the Leadership race has shown us what Albertans and many PC members thought about the party: they’re done.  There are a few hangers on; some passionate and dedicated individuals who don’t want to see their party dissolved into obscurity and I feel for them.  Ironically, the man who believes everyone has the right to die a slow painful death wants to be the one to remove the PC jugular and save it from such a fate. 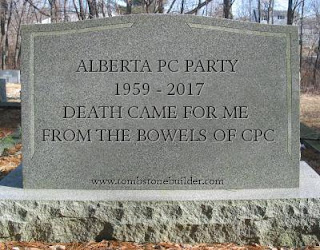 The new United Conservative party will be the next big conversation piece in Alberta politics and it will be anything but dull.  Back in Nov – Dec 2016 a poll specifically asked those who favoured a United Conservative party if they would prefer a party led by Brian Jean or Jason Kenney.  Respondents chose Jean.  At that time, Brian Jean was claiming the Wildrose was not interested in joining with the PC party.  Only a mere month later, Jean announced he would step down from the Wildrose and run for leadership of that united party.

Then came a new twist.  A few days ago, another poll claimed that although Jean still held the lead in a race with Kenney he was not the front runner.  With an easy majority of votes, the clear winner to lead a United Conservative party was “I don’t know”, followed closely by “Someone else”.  The publicly interested candidates are third and fourth… out of four possible choices.

Now that’s what builds anticipation.  Who could this potential leader be?  People have suggested yet a third CPC MP alternative in Rona Ambrose but she hasn’t shown any interest in the role.  Is there another former CPC MP who might be up to the task?  Would the membership even consider someone who wasn’t a CPC MP?  Is there someone just biding their time until the united party is created?  The plot is so full of possible twists that whiplash becomes more than a potential side effect.

And that, my friends, will give everyone something to talk about.