I collected every button I could find because I felt this would be the last time they would be made.  In retrospect, I should have taken extras.  I went into the convention without a horse in the race; here to observe and maybe learn something new.  I also went to talk politics because I figured there would be one or two people who were into that. Upon my arrival, I went to each of the candidate tables and picked up some swag (buttons) and each one went into my purse.  I knew the Kenney supporters would likely be the majority of attendees and I wanted to have the opportunity to hear their stories by not wearing my views like scarlet letters.  I talked with someone I’d known from another career.  I talked with a young-ish couple who turned out to be Kenney supporters.  I decided I would introduce myself to people I recognized from Twitter and meet some progressives to round out the experience.

As it turned out, my first instinct about not proclaiming my views with visual aids was correct.  My new acquaintances from Red Deer and I were getting along swimmingly until they saw my pin from Duncan Kinney (which I loved so I put on as soon as he gave it to me and forgot I was wearing it).  The one noticed it and I saw her mouth form a large “OH”.  I ignored that and put my button back into my purse as we headed over to Kenney’s party.  The room was huge, the music was loud, the lights were low and it kind of felt like it was the end of the night after a wedding.  I had to make some calls and I wanted to check out the other parties as well so I bailed. 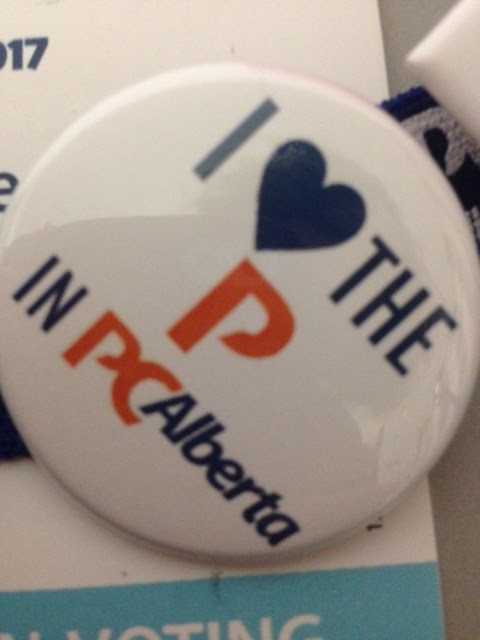 I went up to Byron Nelson’s floor and I could hear from the elevators that there were jovial people about.  The atmosphere was extremely upbeat and I talked with a few people and had a beer.  Slight digression here because it needs to be said: domestic drinks were $9 and premiums were $11.  Byron was giving out free beer.  I had a Heineken.  Anyway, I talked with some people, met Byron, got a card or two and made a new acquaintance who was heading to Richard Starke’s party.  The atmosphere at Byron’s party was super but the room was way too small and all those people gave it a muggy, hot feeling that I was completely overdressed for.

We arrived at Richard Starke’s party and that was a happening place.  The lights were on, there was seating and food (and $9 + drinks) and people were in a great mood.  I also found someone I’d met earlier and we talked about the political atmosphere in the province.  At one point, a guy wearing a Sewer Rat button (I got one later) showed up and joined us.  He was happily complaining about the carbon tax and then moved on to talk about how it’s a nice idea to go green energy and all “but how are they going to pay for it?!” My cohort said “the carbon tax” just as I coughed out “carbon tax” and we all had a great laugh. This was what I came for: people talking politics without having a conniption.
Kenney supporters were milling about, there were MLAs and campaign gurus and tonnes of volunteers and we all seemed to get along, talk about politics and have some laughs.  Looking back, those pre-vote parties were a celebration of the hard work that had gone into the campaigns.  A feeling of optimism was in the air; almost as if anything was possible at the vote… almost. 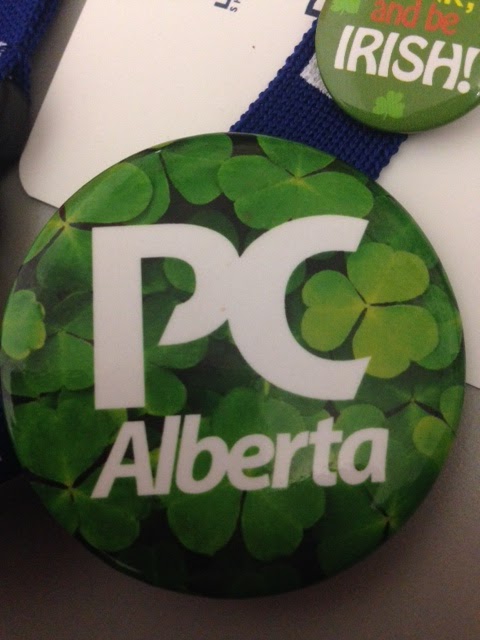 Some of us who pay attention to numbers thought the vote would go a certain way.  I have to admit that after I spent time with people from the Starke party, I realized that not everyone thought the outcome was going to be what it was.  Talking with a volunteer from Starke’s campaign, I asked if there were plans for a post-vote get-together.  She seemed unsure of what I might be referring to and I showed her the invite I had from Duncan for a “PC Party Wake” that was scheduled at 7:00 the next night. What happened next was when it finally hit me that my disassociation to the outcome had caused me to neglect something very important; the people for whom the outcome really did matter.  She started to cry.  Needless to say, I felt horrible.  And humbled.

In the morning the campaigns were busy working on the candidate speeches and I was pretty excited for those.  I had missed them the night before because registration was rather disastrous and I was in line while they were taking place.  I found myself a seat in between a Kenney supporter and two Starke supporters. 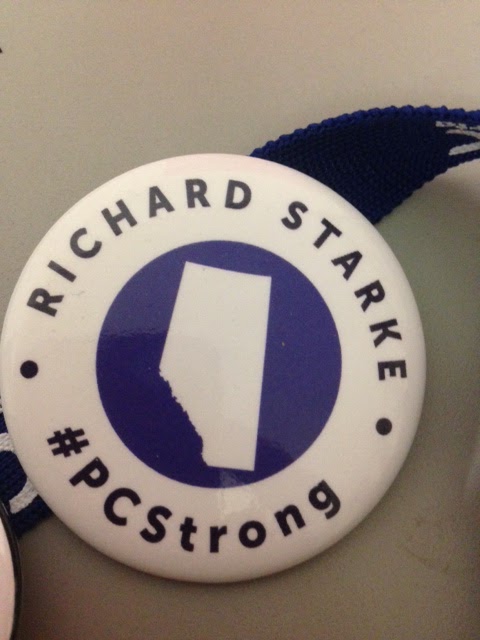 The speeches were on point; their last effort at influencing the voters.  Byron still believed in the PC party and respected his fellow candidates.  Starke outlined the numerous embarrassing moments for the Wildrose.  “Is that what people wanted from their elected officials?” He asked. “Because that’s what we are heading into with a united party”.  As he started to list off the bozo eruptions, loud boos came from the back of the room. At first I wasn’t sure if they were booing the acts themselves or the fact that he mentioned them.  It turned out to be the latter as, when I finally located the sound, it was coming from a large group holding Kenney signs.

My Starke companions were an elderly couple who scoffed frequently during Kenney’s speech.  On the other side of me, the Kenney supporters were just as frequently getting up to clap.  When Kenney spoke again about the success of the united federal party one woman yelled out “but you lost that election!” Not that it matters, apparently.

We had three and a half hours to wait for the voting to take place and results to be counted. The candidates were busy with media interviews and I had plenty of time to talk to people.  I discovered there was another layer to the vote that I hadn’t really considered: the plan.  Kenney had strong support, obviously, and people who actually want to see him as the leader of the next conservative party.  But one gentleman who left the PC’s for the Wildrose a couple of years ago had an interesting story.  He said he was undecided about the leadership of the new party. 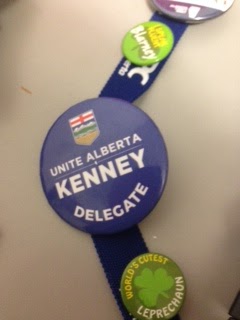 Though he was partial to Brian Jean, he felt Jean didn’t utilize the media to the full extent he should.  As a delegate, he said he spoke to Kenney and Starke a number of times trying to gauge which would be a better choice for what he was interested in.  Kenney, he said, had explained his unity plan in such a way that this delegate felt it would be most successful.  For starters, the PCs had enough money to pay off the party debt.  According to what he understood, the plan was to fold the PC party and have the sitting MLAs move into the Wildrose.  The Wildrose would then be renamed and rebranded.

I spoke with a number of people while we were waiting for the voting booths to close.  More than one of those people spoke with more passion about the plan put forward than the candidates.  More than one of them said that’s what they had voted for.  Starke’s plan relegated Wildrose to perpetual opposition and they didn’t think Wildrose would go for that.   A vote for Kenney’s plan, they said, was not necessarily a vote for Kenney.  Interestingly, there was a lot of talk about the possibility of a “white knight” entering the united party leadership race.

After the vote tally was announced, I saw the couple of Starke supporters I’d sat next to that morning.  They were looking quite dejected and I decided to go tell them what I’d learned from people I’d talked to.  When I told them some were more interested in the plan than the candidate they seemed relieved. She looked up at her husband with what I c 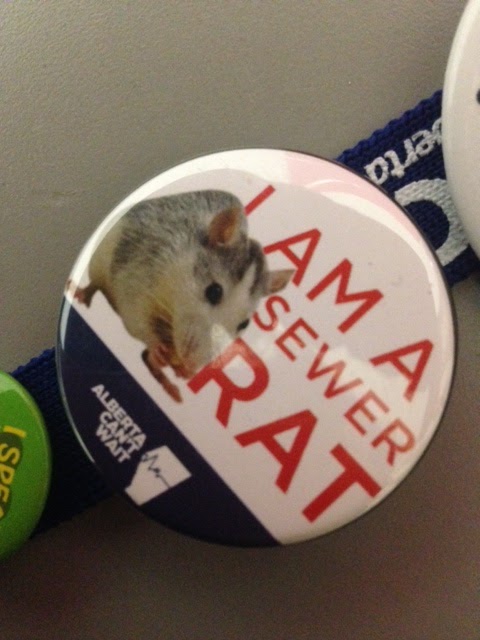 an only describe as surprised optimism.  They thanked me for telling them and said it gave them some hope.

Someone asked me why I even cared about this and I decided the reason was fairness.  The Nelson and Starke supporters were trying to keep their party and someone who didn’t care about their party in the first place saw an opportunity to force them to give it up.  Yes, this is politics.  The only way forward for a genuine conservative party is to obliterate the baggage from both the PC Party and the Wildrose Party.  While it wasn’t all bad, a party with no history has no baggage; but I doubt that will last very long.