After ten days hiding from accountability and doing his job, like a groundhog Jason Kenney emerged from his hibernation today to deliver a verdict on Alberta’s future.

One would have hoped that the Premier would see the dark shadows his inaction and lack of leadership have cast on Alberta, but alas it wasn’t meant to be.

Instead of finding his spine and providing meaningful leadership and action to prevent the impending tsunami of death and destruction that is barreling towards our economy and healthcare systems, he offered a series of half measures and rehashing of current Covid19 restrictions that will merely delay the impending broad-based lockdown that he seeks to avoid.

Kenney started off the press conference almost 20 minutes late, after having already delayed it from this morning because “they needed time to develop communications for these complex measures,” according to a government source.

This pandemic started in February and hit its first crescendo in March as we locked down then, presumably to give the government time to prepare for a situation similar to what we find ourselves in today. Apparently 8 months was too short a time for the partisan hacks who are paid $14 million dollars a year to advise our government in communications and issues management.

He started off with his oft cited concerns about mental health and business support as a justification for avoiding lockdown.

The provincial government has prioritized the economy above human lives and sustainability of our healthcare system almost exclusively since day one. If they truly cared about mental health and wellness, they would provide psychological care as part of the Alberta Health Care Insurance Plan.

This is a case of crocodile tears where the people with the levers of power to effect change choose to not employ them.

Premier Kenney stated that there was not one known case of transmission in personal services like hair salons.

He neglected to mention that over 80% of transmission is unknown – because Alberta has effectively stopped all contact tracing for the past month. He’s stating confidence in data that simply doesn’t exist, because his government failed to adequately expand contact tracing capacity through hiring and training in anticipation of a second wave.

He announced that masking would be mandatory in Alberta’s two largest cities, something that has been the case since summer.

In other words, we are relying on more personal responsibility, the Covid19 control plan that has brought us to be the worst in Canada in absolute and per capita cases.

Essentially if you’re spending money to have a good time you are protected from Covid19.

Kenney pointed out that the WHO has advised against using lockdowns as a primary means of pandemic control due to the associated mental health and wellness risks.

The point that is lost on the premier is that with the current state of our cases and transmission rates we are past primary control measures.

The half measures he enacted today might have been meaningful a month or two ago when our health system wasn’t nearing or over capacity in ICUs, and when doctors and opposition were calling for them. His insistence that there was a (false) dichotomy of choices that included only locking down or only protecting the economy brought us to where we are today.

Health Minister Tyler Shandro then got up to tell us that “we’re not going to regulate our way out of the pandemic,” and that we needed to change our behaviours; Basically echoing Kenney’s call for ‘more personal responsibility’ – the Covid19 containment plan that has failed us into the unenviable position of worst jurisdiction in Canada.

Preferred Edmonton Journal stenographer to the Premier, David Staples, then chimed in with a question about lockdowns and resisting them, to which the Premier came to the lectern to declare that Alberta’s Covid management was very successful to date compared to the USA and Europe – as if this was some sort of accomplishment, again neglecting the fact we are far and away the worst performers in all of Canada.

Kenney touted the ABTraceTogether App, which has cost nearly $1 million and provided a grand total of 19 exposure notifications for the entire province.

He then justified not doing more because of Charter Section 1 jurisprudence – saying restrictions on individuals’ freedoms weren’t justified by a public health emergency. Unfortunately for Kenney, the Premier of Ontario, with whom he touts a bromance so close that they finish each other’s sentences, has instituted those same lockdowns that apparently can’t be done here just this week, while Ontario has the same or less actual case numbers and about a third per capita of what we now have.

Protecting the economy and human health and life are not mutually exclusive goals. In fact, they are conjoined at the hips.

Look at Australia and New Zealand who enacted tough lockdown and quarantine procedures for a few short weeks and were then able to return to very close to normal lives.

Sports stadiums are currently packed down under, because their governments gave a rip enough to see the big picture and how the economy, public health, and human life interlocked and enable each other. An almost normal life and economy have been operating there for months now.

All these half measures do is ensure that in three weeks when we are continuing to see exponential growth of cases that more severe and longer lasting lockdowns will be inevitable.

The people who are inclined to exercise personal responsibility have been doing so since March. Those who don’t care about collective protection have been enabled by a do-nothing government that has failed its most basic of duties to care for the health and life of the population they were elected to represent.

My prediction is we will see case counts in the range of 2500-3000 cases per day by the time the three-week directive is up, at which point the government will be left with little choice but to cancel Christmas.

We are only beginning to see the crest of what is going to be an inundation of our province with the type of crisis it has never experienced before and that it will likely take a generation to recover from. Kenney’s inability to make a tough decision in the interest of what’s right will cost thousands of Albertans their lives, enrage his opponents to the right and left of him, and ultimately will be the start of the undoing of his political career.

Robbie Kreger-Smith is a consultant for restaurants, communications, and marketing with previous partisan political experience in Alberta. 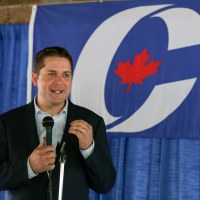